Sierra City’s Sesquicentennial on June 21-22 was a resounding success. Saturday’s events began with speeches on the balcony of the Old Sierra City Hotel, where several dignitaries bestowed honors on the Sierra City Post Office for her 150th birthday. Within minutes of the completion of these formal ceremonies, some of those same dignitaries found themselves down the street in the hoosegow.

The jail was hopping all day long as were the booths at the craft fair, the vintage portrait studio, and the pasty-making demonstration. Highlights of the day were chats with old-timers C.K. Smith, Jack Rose, and Howard Hayes as well as narrated cemetery tours. The day was topped off with a BBQ and melodrama at the Kentucky Mine. “Never Trust a City Slicker”, presented by the Sierra Turnpike Players and the Sierra County Arts Council, was a huge hit. 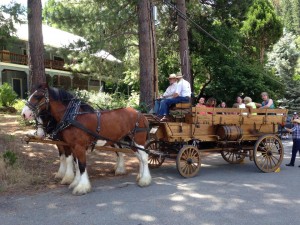 Wagon rides at the Community Picnic

In contrast to Saturday’s excitement, Sunday’s more relaxed format featured services at the Methodist and Catholic churches, a lecture about Bill Meek, stagecoach driver; and a town picnic complete with wagon rides and a community photo. The weekend culminated with a magnificent birthday cake depicting the Sierra Buttes that was created by Amber Sainsbury. Folks went home with a renewed sense of community in our beloved Sierra City.

Get your Sierra City 150 cap and other memorabilia by August 30 before it’s gone! Check it out.

Music at the Mine Tickets

Want to be alerted when concert tickets go on sale?
Sign up here!

Email:
Museum
Membership
Music at the Mine
General Info